Almost 20 years. That’s how long Chloë Grace Moretz has been acting; and for more than 10 years of that time, intense paparazzi and social media intrusion have been her reality. “There’s always gonna be the darkness that comes with fame,” she tells me as she fiddles with the zip on her oversized hoodie while sitting on the sofa of her LA home. “When Kick-Ass came out, I was 12 years old,” she continues, “and I think from that point forward everything shifted.”

While 2010’s Kick-Ass was undoubtedly the breakthrough moment for Moretz, now 25, it’s certainly not all she’s known for. With more than 50 film credits to her name, from the critically acclaimed Clouds of Sils Maria to the comedy Neighbors 2: Sorority Rising, in which she starred alongside Zac Efron and Seth Rogen, she has been busy. She also has a reputation for speaking out in support of a range of issues – such as LGBTQIA+ rights and Hillary Clinton circa 2016 – and as a result she has earned what is known in the industry as “a good rep”. When we speak it’s to promote her upcoming Amazon series, The Peripheral, adapted for the screen from William Gibson’s sci-fi novel about virtual reality, time travel and family. It’s a whirlwind of a watch, both gripping and horrifying in turn, almost like fame itself, really.

“The Peripheral was my first foray into television. It’s eight, hour-long episodes all-in — which is like shooting eight movies back to back. It’s a behemoth, to say the least, but it was perfect,” Moretz says. “It’s filled with so many twists and turns and really exciting action sequences, so it has something for everybody. But for me, at the heart of it, it’s about strong interpersonal relationships. The relationships between the characters are so dense and so beautiful that you want them to win against all odds.” 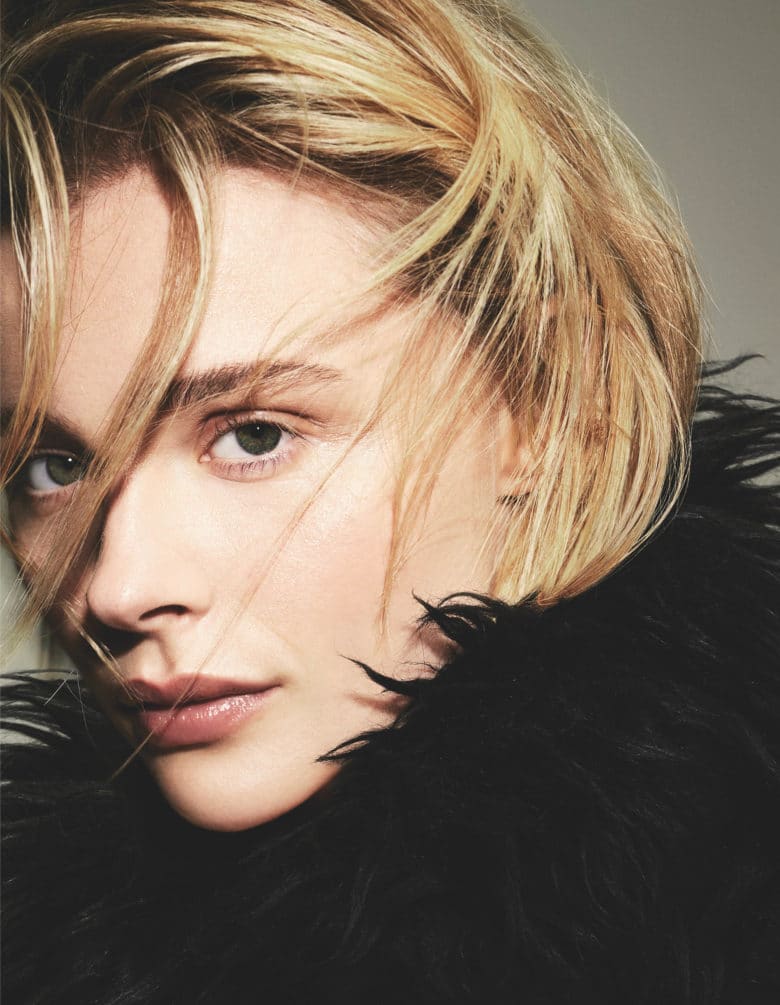 So, having been in the public eye for more than half of her life, does Moretz remember a time before? “Yeah,” she says after a pause. “It is kind of a distant memory, in the sense that I was a kid and 90 per cent of the time no one would really bother me. But after Kick-Ass, the first time I experienced paparazzi, it was 10 to 15 adult guys surrounding a 12-year-old girl,” Moretz recalls. “They pushed my mom and she ended up falling into traffic – she didn’t get hurt, but the situation was really chaotic. It’s an assault on all the senses, with screaming and flashes. I got into the car afterwards and I just burst into tears. I think that’s my marker of before and after.”

Despite this, Moretz says she was “blissfully unaware” of the attention she was getting for a while. She was occupied elsewhere – working on projects such as Martin Scorsese’s Hugo, Tim Burton’s Dark Shadows and Carrie, in which she played the titular role. She was also training a lot (she’s a martial arts aficionado and has always done most of her own stunts). And then all of a sudden, she wasn’t. “I remember the day I became aware of it,” she says. “And it hit me like a ton of bricks. I was 18 and doing a red carpet. I walked off of it and I felt so much self- loathing and was really confused about the experience that just went down. I was really unwell after that. There was this complete jarring shift in my consciousness, I questioned who I was. What am I doing? Who am I? Why am I doing this? Like, what does this mean?” 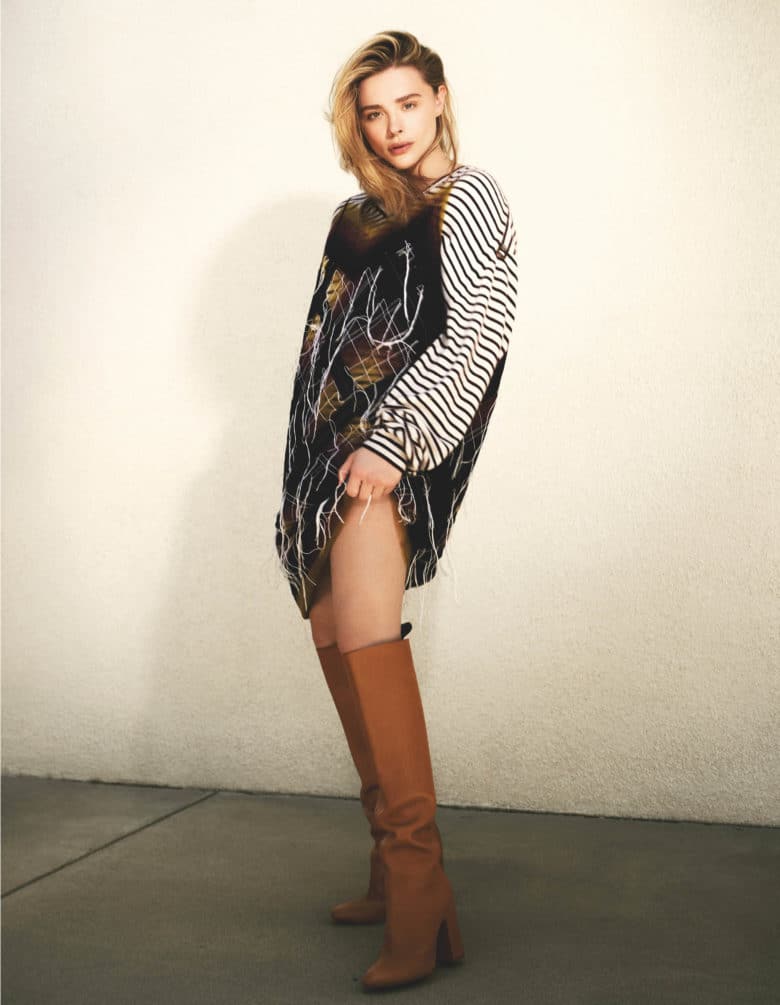 All clothing and shoes by LOUIS VUITTON.

Enter: therapy. A lot of it. “I had to work through that,” she says. “For a long time I was able to be the Chloë that people see and the Chloë that I am in private. Then those two worlds collided and I felt really raw and vulnerable and open. And then came the onslaught of horrific memes that started getting sent to me about my body. I’ve actually never really talked about this, but there was one meme that really affected me, of me walking into a hotel with a pizza box in my hand. And this photo got manipulated into a character from Family Guy with the long legs and the short torso, and it was one of the most widespread memes at the time.

“Everyone was making fun of my body and I brought it up with someone and they were like, ‘Oh, shut the fuck up, it’s funny.’ And I just remember sitting there and thinking, my body is being used as a joke and it’s something that I can’t change about who I am, and it is being posted all over Instagram. It was something so benign as walking into a hotel with leftovers. And to this day, when I see that meme, it’s something very hard for me to overcome.” 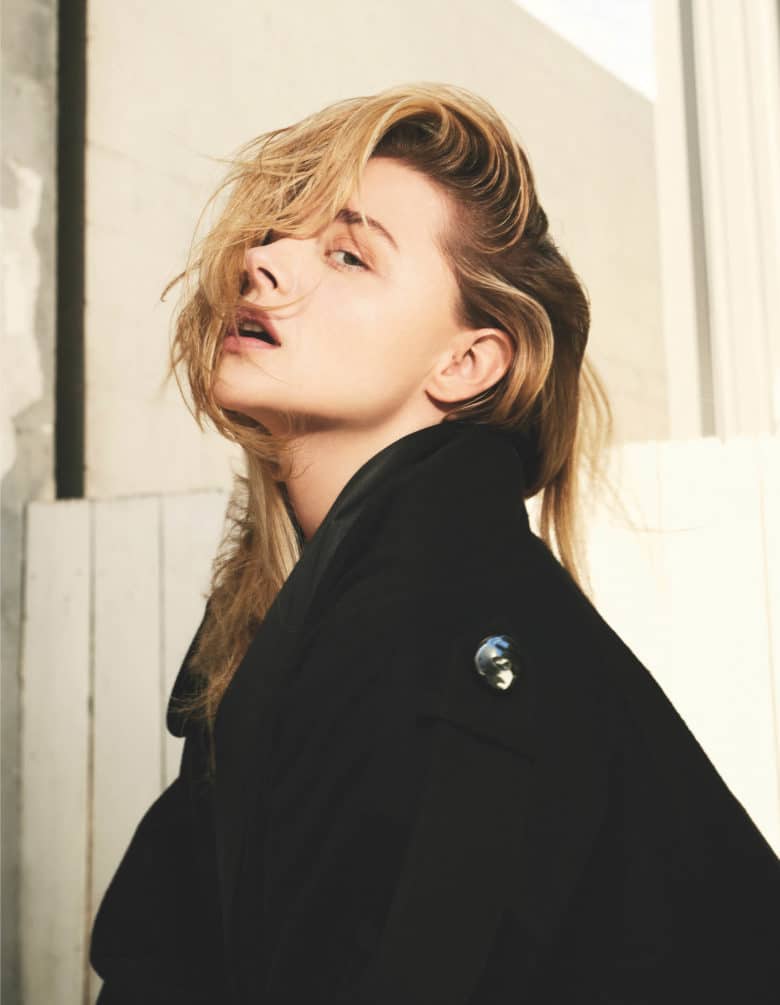 This level of candour from someone so, well, famous is rare. As are the painfully relatable feelings that they trigger. “After that, I was kind of sad,” she admits. “It took a layer of something that I used to enjoy, which was getting dressed up and going to a carpet and taking a photo, and made me super self-conscious. And I think that body dysmorphia – which we all deal with in this world – is extrapolated by the issues of social media. It’s a headfuck.”

So how do you deal with something as all-consuming as this? “I basically became a recluse,” Moretz says. “It was great because I got away from the photographers and I was able to be myself, and to have so many experiences that people didn’t photograph, but at the same time it made me severely anxious when I was photographed. My heart rate would rise and I would hyperventilate.” 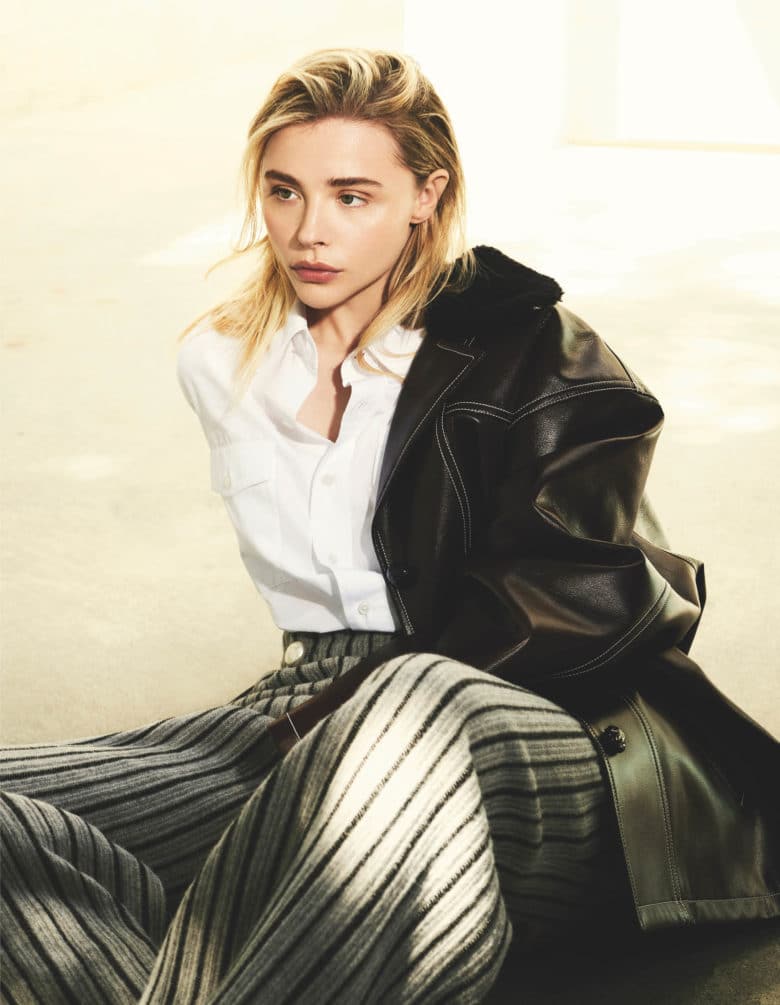 Was the pandemic a tonic of sorts, I wonder. Being able to blend in amid a sea of anonymous masks and not go out? “Yeah, for sure. It definitely aided that experience for me. I just put a hat on, put a mask on and then put my hood up and would be able to get away with a lot more, like go to a concert or bite my lip or have undocumented pimples.” There was also respite in terms of schedule, as Moretz goes onto explain: “For the first time, I didn’t have to think about what I was doing next month or what I was going to do in a week. I know that’s obviously a very privileged thing to say, and I’m very aware of that. But for me it was a time of introspection. I lost my father during the pandemic, not due to Covid-related issues, but there was a big amount of change in a really transformative time period. After that happened I had to go to London to start filming [The Peripheral]. And I think that working again came at the perfect time in a lot of ways.”

“I’ve always used acting as a form of therapy,” she continues. “So being able to use that in this project was wonderful and really healing. Funnily enough, my father and that side of my family are all from North Carolina, and we ended up filming in Asheville, which is about 15 to 20 miles from where my dad was born and raised. There was this wonderful full-circle moment where, by the time we got to that point, it was at the very end of production and there was this beautiful release. My dad and I had a very tumultuous relationship, so by the time that release happened, it was just really meaningful. To say that these past two years have been transformative is an understatement, to say the least. I’m a very different girl than I was. I feel like a woman now.” 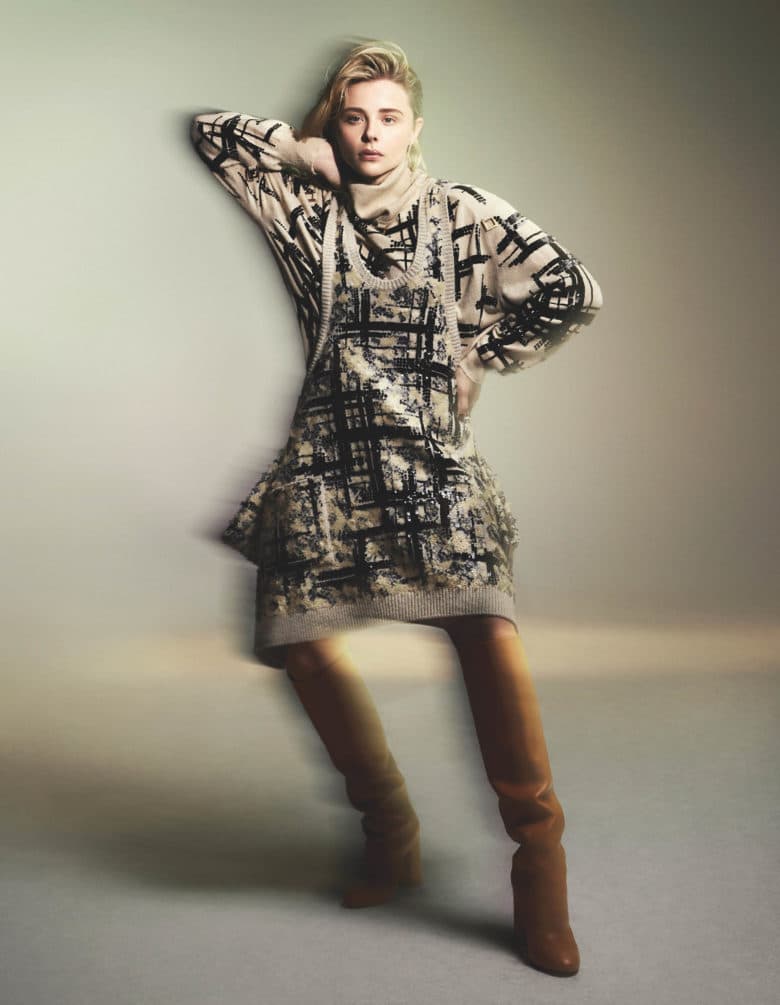 All clothing and shoes by LOUIS VUITTON.

And what does this extraordinary woman have planned for the future, now that she is back out in the world? “I have my sights on getting behind the camera,” she replies, “and seizing that freedom that you get being behind the camera instead of being in front of it all the time. But my five-year goal is to get land somewhere and start that process of being able to live in two parts. Half LA, half farm. My love language is nature.” She laughs, then tells me she’s heading to Colorado the next day for a few nights off-grid before working for the rest of the year. “It’s a new thing I’m doing,” she says. “Taking time to refill my cup. It’s all about boundaries and using your voice.” Sounds simple but effective. And hopefully (and deservedly) peaceful. I think she’s earned it.